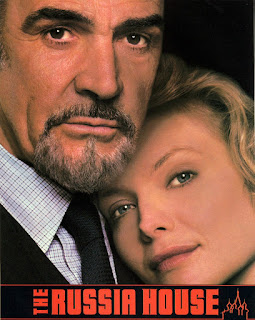 The Russia House is a spy novel by John le Carré published in 1989. The title refers to the nickname given to the portion of the British Secret Intelligence Service that was devoted to spying on the Soviet Union. A film based on the novel was released in 1990, starring Sean Connery and Michelle Pfeiffer, and directed by Fred Schepisi.

It was panned by some critics and audiences - some were expecting a James Bond type spy adventure - I think it was connery's first post- bond outing in a spy thriller. Others found the plot too complicated. I remember some people walking out of the cinema after about five minutes.- probably the same sort of people as those i saw leaving "Tinker, Tailor, Soldier, Spy"  before the opening title sequence had finished!  FFS what were you expecting! 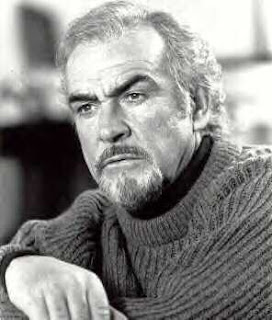 I loved this film from the first time I saw it.  And have lived and breathed it ever since - it  got under my skin. Why?  Mainly because it is set in Russia and was one of the first Western films shot there, and, as I mention elsewhere it beautifully captures Moscow, St Petersburg and the Russian countryside in between;  it is based on a John Le Carre novel - my favourite author; all the cast play their roles convincingly and brilliantly especially Michelle Pfeifer's portrayal of a Russian woman.

But the film is greater than the sum of its parts, I love the dialogue which can be witty at times, I love the jazz influenced sound track, I love the scenery; but most of all I think that the film accurately portrays some idiosyncrasies of Russian attitudes and mannerisms as well as capturing the sense of fear that pervaded encounters between Russians and Westerners in Soviet times. 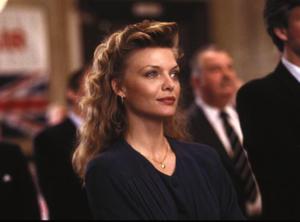 John Le Carre intended that his novel be a kind of snapshot of the early days of Perestroika when the Soviet Union was becoming a more open and freer society.  The policies of Glasnost and Perestroika were yet more state doctrines, imposed from above.  The general population was understandably apprehensive; there was no guarantee that thing would not go back to how they were, indeed the coup attempt in 1991 is testimony to the desire of some apparatchiks to turn back the clock.  Both the book and the film manages to capture the mood of that period in the dying days of the cold war when the grey men on both sides wished to perpetuate the arms race.

The film may well seem dated in many respects - the collapse of the Eastern bloc, Soviet Union, communist ideologies, made the film seem passé when it was released. But the themes of betrayal, conflicting loyalties, ideology and idealism, the corruption of bureaucracy, and, of course, love, are   enduring themes and continue to be relevant.

This is my blog which details my quest to identify, list and "bag" all the the locations used in the film.
Posted by bouncermangel at 08:59 6 comments:

Posted by bouncermangel at 06:49 4 comments:

Posted by bouncermangel at 06:49 3 comments: